While leasing farming land is a common practice in rural Kenya, existing legal provisions for leasing land are unclear to many community members. The community sees the official process as very costly, serving well-off people who lease large and/or high-value land. Community-led land lease guidelines, on the contrary, are accessible to smallholder, resource-poor farmers. The guidelines are very popular because the community co-developed them.

George Mbele is a farmer in Isukha West Ward, Kakamega County. In this region, sharing benefits between land owners and land lessees is a major issue: “Land has become very scarce,” he explains. “A lot of people want to use any means, sometimes means outside the books. The only way we can benefit is if the person leasing the land benefits and the person who leases benefits. And then we have a society with increased food production.”

TMG Research and Shibuye Community Health Workers (CHW) have facilitated a pioneer process in the wards of Isukha Central and Isukha West in Kakamega County. The process addresses the chronic challenge of limited or no access to and control over land. This problem particularly affects women and youth and is a significant barrier to food production and adoption of sustainable land management (SLM) in western Kenya.

Most rural households in Kakamega County depend on agriculture. But ever-increasing demand for food and housing to accommodate a growing population has put tremendous pressure on land. The current average land holding per family is approximately 0.6 ha. Even where land is available, the distribution of land access is unequal between family members due to customary inheritance laws that favour male household heads. Consequently, women and youth are disadvantaged. This insecure access to land affects women and youth’ abilities to invest in soil protection. Lower SLM adoption rates are a direct consequence.

At least 38 per cent of the households depend on leasing land to supplement household food and cash needs. Though land leasing provides farmers with no or small landholdings with a handy option, numerous challenges remain: owners reneging on informal lease agreements made without witnesses, crop theft, damage of crops without compensation, and conflicts over arbitrary change of boundaries.

THE PROCESS: Community-led Land Lease Guidelines step by step
The guidelines drawn up by the community followed six steps:

To ensure ownership as well as respect of local practices, Shibuye CHW sought institutional stakeholder input on designing a process for developing land lease guidelines. These institutions included the area administration, the county ministries of agriculture and lands, and the Land Control Board.

2. Mobilization at the community level 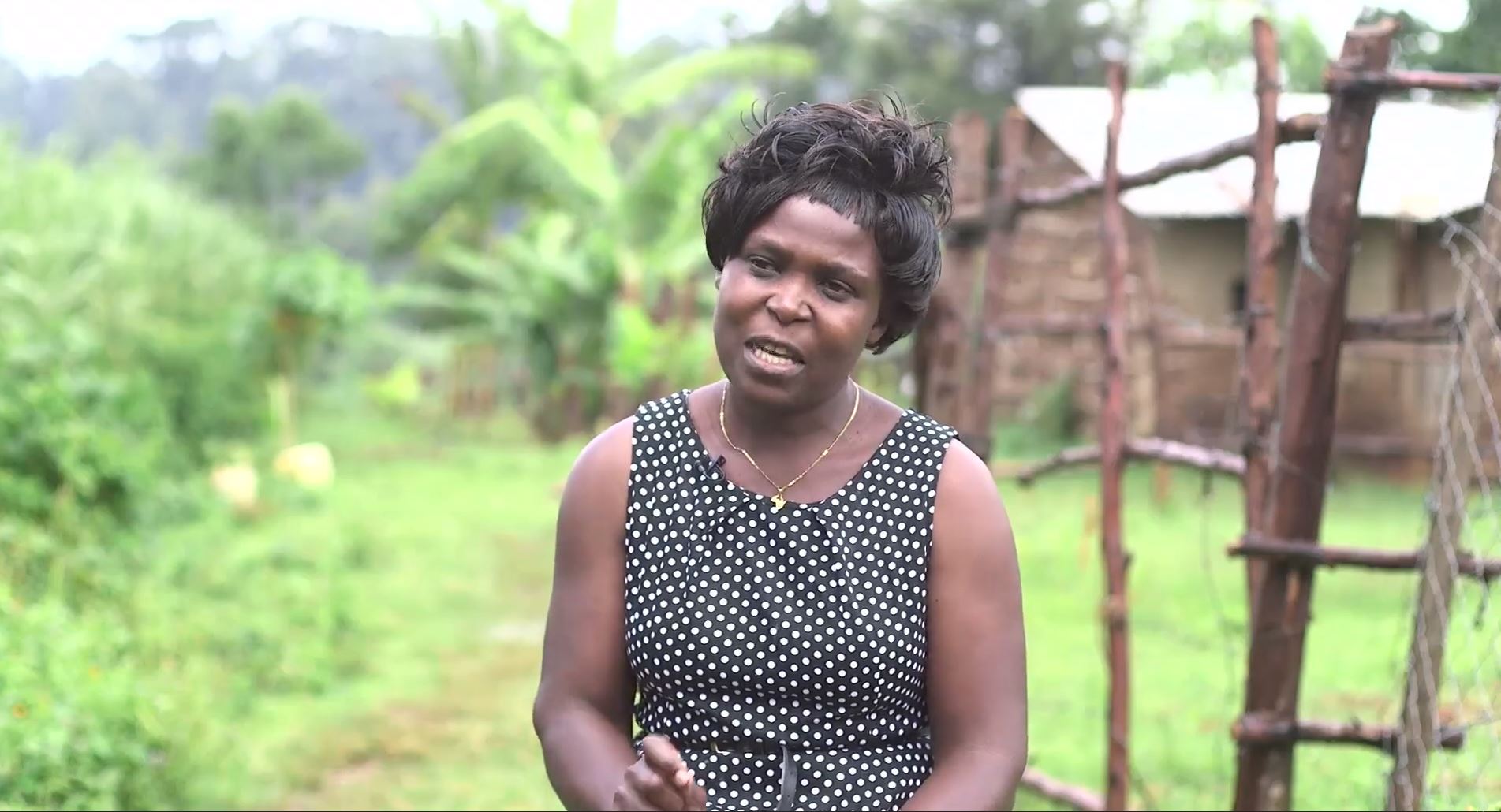 Shibuye CHW then convened awareness and consultation sessions at the lowest administrative levels (sub-locations). A diverse representation comprising men, women, youth and single-headed households was key to ensure broad community ownership of process and outcome. In these meetings, the community outlined terms of reference for further guideline details. The participants of each sub-location session nominated representatives to form drafting committees.

Nominees of the different drafting committees consolidated the outputs of the various sub-location lease guidelines into a single document. The consolidated draft was then shared with the institutional stakeholders previously consulted under step one for their approval.

The approved consolidated guidelines were then launched at the sub-location level. Launch meetings were attended by the respective drafting committee, local administrative and faith leaders, and community representatives. Along with the local governmental administrators (assistant chiefs), Shibuye CHW has continued to promote the guidelines in the community.

The guidelines have been welcomed in the pilot communities. As of 30 March 2019, 95 signed lease agreements had been filed at the offices of assistant chiefs – an impressive number given that the leases cover only two growing seasons. Assistant chiefs have already observed reduction in reported cases of conflicts. As one put it, “The guidelines have enabled us to have very little friction. Previously, we have been having challenges where a lot of cases come to us especially at the beginning of planting season. But since we started the guidelines, conflicts over leased lands have reduced”. 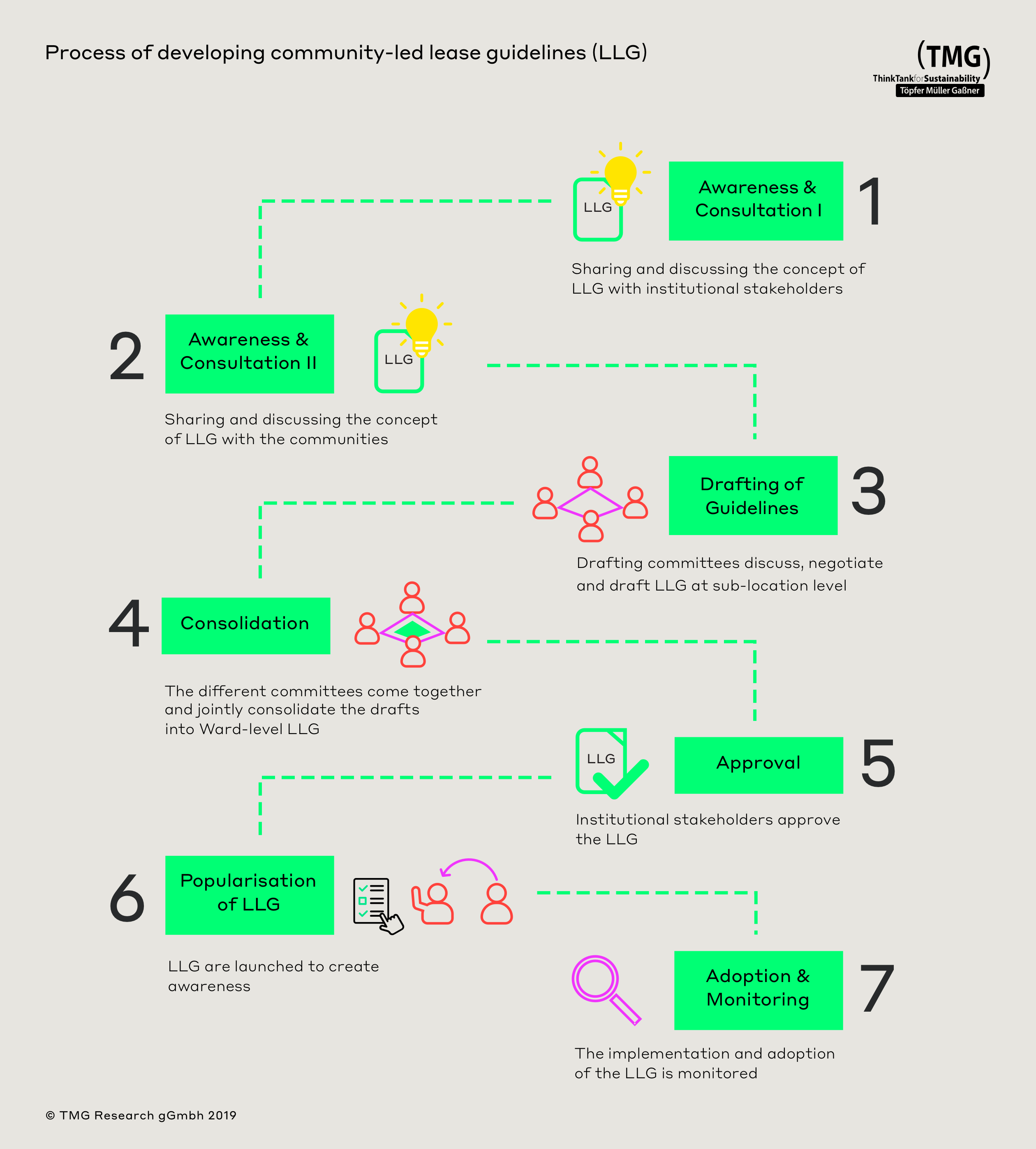 Shibuye CHW has supported one youth and six women groups to lease farming land using the land lease guidelines, thereby creating opportunity for the group members to directly participate in the Soil Protection and Rehabilitation project funded by GIZ, TMG’s partner, by setting up demonstration farms on conservation agriculture. The group members would not have had this opportunity as individuals since they may not own land at all or own less than one acre, which are the requirements for hosting demonstration plots.

The potential is great for upscaling the process of developing the land lease guidelines. Farmers from neighbouring wards requested support to develop their own land lease guidelines as a response to conflicts over leased land. Furthermore, the Governor of Kakamega County and the Minister for Agriculture have praised the process and provided suggestions for scaling it up to the whole county.

This social innovation has demonstrated that even in highly sensitive and emotive topics like land tenure, solutions can be found. When they are rooted and co-developed with the communities that experience the challenges, they attain social legitimisation and supplement existing legal land leasing framework.

This Facilitator’s Guide is intended for practitioners involved in supporting smallholder farming communities in the development of tools to enhance access to land through leasing. It is based on experience gained in piloting community-led land lease guidelines in Kakamega County in Kenya but can be adapted to other contexts.

This booklet narrates how the community of Isukha Central Ward, in Kakamega County, Kenya, piloted development of Land Lease Guidelines in 2017.